Only five minutes away from the city of Otavalo, Ecuador, are two attractive touristic spots: the San Pablo Lake, southeast of the city, and El Lechero, a gum tree located at the top of a nearby hill.  These two magical places are the main characters of a fascinating legend. 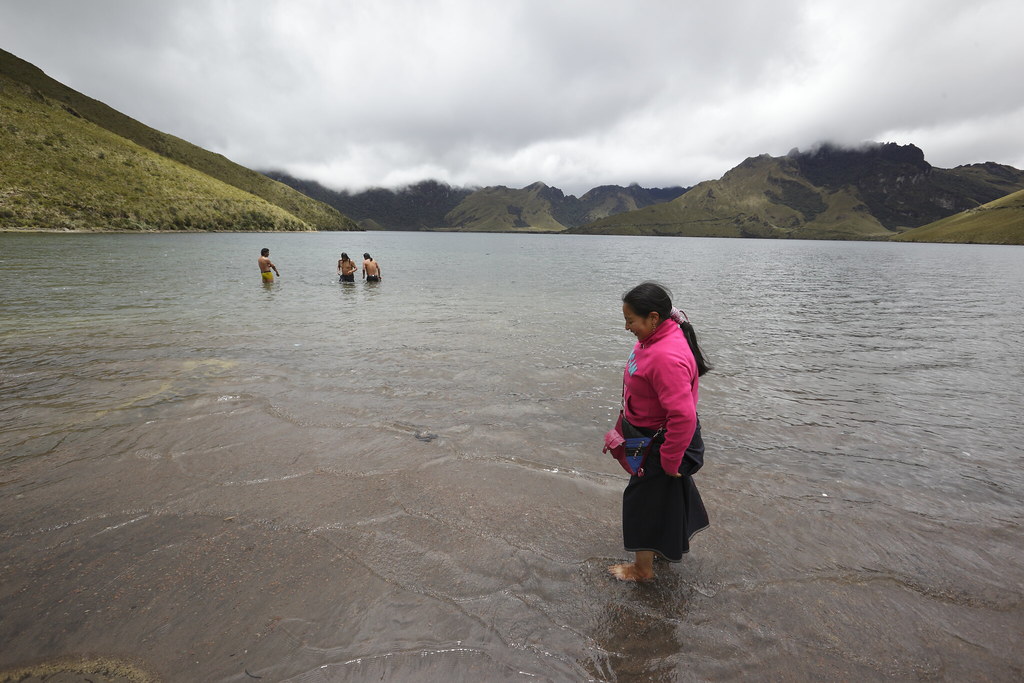 The story goes that north of Ecuador in the Andean mountain range, in a region now
known as the Imbabura province, there was a time of great drought during which nothing would grow in the fields. According to the tradition of those times, it was necessary for a young maiden to be sacrificed in order to calm down the rage of the Imbabura volcano, which was believed to be the cause of such a dry spell.

A beautiful native girl called Nina Pacha (which means Light Source) was chosen for the sacrifice. Nina Pacha was in love with a young man called Guatalquí, who was ready to do anything to save the life of his beloved. It was impossible to escape from the village, since it was very well guarded, so the lovers decided to get help from a powerful wizard. He told them that the only way to leave the village and escape from the sacrifice would be having Nina Pacha cut one of her two beautiful long braids. Both lovers had to hold on to one end of the braid without letting go, as proof of their union and their love’s strength. The wizard added that they could not look at each other’s face nor back to the village until reaching the top of the nearby mountain, otherwise she would become a lake and he would
become a tree.

The lovers began their escape following the instructions from the wizard. With a lot of effort, the couple was finally approaching the peak of the mountain, but they were not alone: they were being chased by a mob of angry villagers. When the two lovers were about to get caught, Nina Pacha could not help looking back, and Guatalquí did the same involuntarily. At that moment, the sky cleared and the Imbabura volcano awoke from his sleep. The beautiful Nina Pacha became a big lake at the foot of the volcano; and at the same time a lightning struck the young man, who vanished, leaving behind a leafy tree known nowadays as the Lechero. At the end, the shocked villagers witnessed a hard rain falling over the fields …the drought was over.

It is said that from that moment on, the lake and its guardian tree became a place of prayer and rituals related to agriculture. The tree and the lake are very close to one another. A visitor can see the entire lake from the top of the hill where the tree is located, as if the young Guatalquí were protecting his beloved Nina Pacha, staying together for
ever like they couldn’t before.

Nowadays, it is believed that when you visit El Lechero for the first time, you can make a wish while hugging it tightly. As long as you’ve proposed a positive wish, the tree will make it come true.